I’m just back from attending and speaking at the first ever The Genealogy Show, which was held at the NEC, Birmingham, UK on June 7th and 8th. This was my first time speaking at a UK genealogy event. I’m very appreciative to have had this opportunity. It was also great to get a chance to fly into somewhere that wasn’t London. The short flight time between Cork and Birmingham was a major advantage, plus being able to just walk into the NEC from the airport. I didn’t get to explore Birmingham itself but maybe next time.

I was speaking on the Saturday about using oral history for genealogy. I didn’t get a massive turnout for my talk and ran into some technical hiccups when the interview clips I had hoped to play didn’t work. But those who were there seemed to enjoy the talk. Given that this was my first time delivering this particular talk, it gave me the chance to figure out what worked and what didn’t. The next time I give this talk I might go for a title which is a bit more obvious and gives an audience a better idea of what to expect. But I had several interesting conversations with people on the topic of oral history afterwards.

Aside from speaking I also participated in the Personal Wizard consultations. I was most impressed with the fact that the show had laptops at each of the tables, saving the hassle of bringing our own. I don’t know if I was able to help anyone break down their Irish brick walls during the consultations but I would hope I at least pointed them in the right direction. What was of particular interest to me were the amount of Irish who seem to have been in the UK even before the Famine. This shouldn’t be a surprise but due to the increasing numbers who emigrated from the 1840s onwards, we of course tend to associate this period with Irish settlement abroad.

Everyone I talked to was very friendly, from the exhibitors, fellow speakers, to all the show volunteers. Everyone there seemed to be enjoying themselves. There was a wonderful international feel to the show, with exhibitors, speakers and volunteers from the UK, France, Spain, the Netherlands, Germany, Canada, Australia, the United States and of course Ireland.

One major highlight for me was getting to meet the author Nathan Dylan Goodwin and pick up a signed copy of his book. His genealogical mystery novels are always something I look forward to. I also was fortunate enough to receive a copy of the new book ‘Ethical Dilemmas in Genealogy‘ by my friend Dr Penny Walters.

My only complaint (if you can even call it that) is that I didn’t get a chance to attend more of the talks. I was too busy chatting to people outside.

The Genealogy Show will return next year Friday 26 and Saturday 27 June 2020. Thank you to all involved. I’m already looking forward to next year and putting together ideas for potential talks.

One the 11th hour of the 11th day of the 11th month 1918, the First World War came to an end. Right up until the last minute the guns stayed firing.

The commemoration of the conflict in Ireland has always been a touchy subject. There was certainly a perception that the memory of the Great War had been overshadowed by the events such as the 1916 Rising and the Irish War of Independence. In recent decades, the inevitable distance of time has allowed for more recognition of the role played by Irish men and women in the conflict. We will likely never know exactly how many from Ireland lost their lives in the war. As well as the Irish regiments, there were Irish serving in British, American, Canadian, Australian and New Zealand armed forces, along with any number of civilian organisations involved in the war.

This weekend I was fortunate to attend a number of commemorative events in Cork to remember those who died 1914-1918. On Friday night there was an Evening of Remembrance in St Fin Barre’s Cathedral. This has become an annual event, organised by members of the Cork Branch, Western Front Association. This is always an especially poignant ceremony, featuring music, poetry and songs to commemorate not just those from Cork, or the Allied forces, but all of those who died in the war. The Lord Mayor of Cork, Cllr. Mick Flynn and the Bishop of Cork, Cloyne and Ross, Dr Paul Colton, delivered particularly moving speeches, reflecting on the impact of the war on their own families. They recognised also that even those who survived the war, often came back with physical and psychological wounds. Bishop Colton made an especially valid point about the impossibility of grasping the magnitude of those who died during the war and it’s immediate aftermath. Instead he advocated for focussing on the personal, of remembering those who died as individuals.

Crowd gathering for the Evening of Remembrance

WW1 memorial in the Cathedral

WW1 Memorial in the Cathedral

Bishop Colton and the Dean of St Fin Barre’s Cathedral, Very Reverend Nigel Dunne, have also been engaged in a project the last four years in gathering together pictures of those from the diocese who died in the war.

Today there were a number of events held at the Cenotaph in Cork, to mark Armistice Day. There was a civic ceremony organised by the Lord Mayor and members of Cork City Council. This was followed by a mass in St Francis Church and a wreath laying ceremony at the Cenotaph by members of the Royal British Legion and relatives of those who died. The ceremony also includes members of the current Irish Defence Forces, veterans of the United Nations and even the British Armed Forces. Bishop Colton also delivered another address and there was a later Ecumenical service in St Fin Barre’s Cathedral.

Bishop Colton delivering the speech at the wreath laying

Member of the Irish Defence Forces laying a wreath

The act of commemoration itself cannot help but be political and likely there will always be those who feel that by commemorating a conflict we are signalling approval. However, I would disagree with this. We may not agree with why WW1 or any other conflict is fought but that doesn’t mean we should simply forget it and those who fought. Commemoration doesn’t have to be about approval or condemnation. As the events in France today have shown, where the French President and German Chancellor stood side by side at Compiègne as they marked the centenary of the armistice signing, commemorating the end of the war can also be about present unity and learning from the mistakes of the past.

Regardless of how we feel about conflicts past and present, we should never forget those who have lost their lives, no matter how complicated their motives. If you are looking to trace your own relatives who served during WW1, most of the major genealogical websites such as Ancestry, Findmypast and MyHeritage have made their military collections available for free this weekend. 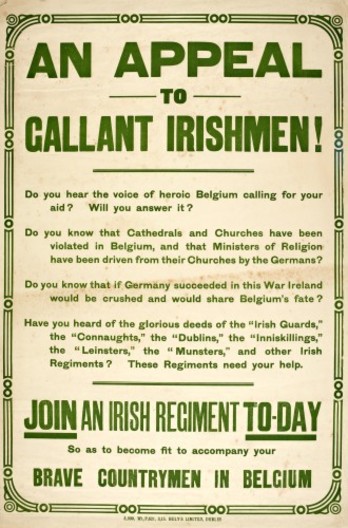